Key Takeaways from AACR21: Leveraging the Immune System in the War on Cancer

Following this year’s virtual AACR conference, we wanted to share some highlights from our favourite talks of the event. This set of talks covered some interesting new strategies for improving expansion function of effector T cells and reversing their exhaustion. At present, immuno-oncology is the largest growth area in oncology drug development, with 4720 agents currently in development compared to 2030 in 2017, including 91 monotherapies and 751 combination therapies currently in clinical trials. The immuno-oncology market is expected to expand rapidly within the next 5 years, with predictions stipulating a 21.8% CAGR taking the total value of the market from $12B in 2019 to a monumental $39B in 2025. 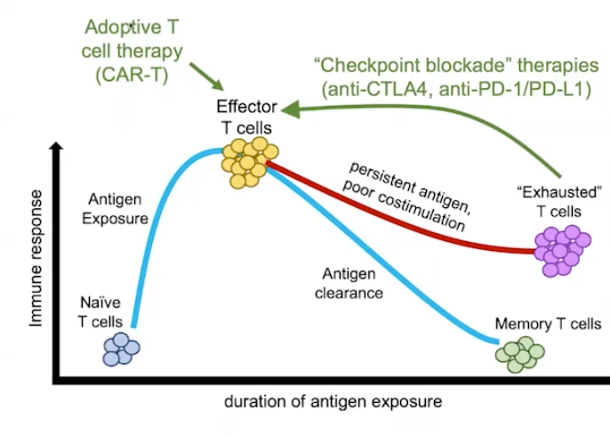 Regulatory T cells (T reg) infiltration of human tumours is known to negatively correlate with patient survival; thus Treg depletion has long been considered a viable strategy for the treatment of cancer. In contrast to effector T cells, T regs express high levels of CD25, a subunit of the IL-2 receptor family, which signals via STAT5 to cause T effector cell activation, T reg activation and NK activation. Recent studies have shown that CD25 receptors on T regs can be preferentially targeted by both preclinical and clinical monoclonal antibodies to enable T reg depletion whilst avoiding the depletion of effector T cells, leading to local availability of IL-2, which is a critical cytokine for proper T effector function.

CD25 has been a long-established target for killing T regs, however it was initially dropped from the pipeline as evidence showed that therapeutic anti-CD25 (PC61 Rat IgG1) failed to boost the activity of immunotherapies as desired. Cell visualisation using flow cytometry indicated that rather than depleting the Tregs as intended, the targeting antibody was instead simply downregulating CD25 expression, leading to a lack of perceived efficacy. The resolution to this problem came from the realisation that for an anti-CD25 antibody to induce depletion of Tregs, it had to bind to the most pertinent activating Fc receptor, which in this case was found to be the mouse FCyRIV. A version of the anti-CD25 antibody was engineered in which Rat IgG1 was converted into mouse IgG2a, enabling the antibody to regain binding affinity to FCyRIV and leading to clear 4-fold downregulation of tumour-infiltrating Tregs.

However, a further problem was discovered: despite effectively depleting Tregs, clinical anti-CD25 antibodies, such as Daclizumab and Basiliximab, were found to also partially bind to CD25 receptors on T effector cells, thereby blocking IL-2 from interacting with its receptor and impairing T effector function. As a result, it became clear that a revised version of the antibody had to be designed that would bind to a different epitope on CD25 and still permit IL-2 binding to T effector cells. In response, Dr. Quezada and his team have developed a new Treg depleter but non-blocking anti-CD-25 antibody (anti-CD25NIB) that has been shown to effectively deplete Tregs in mice and non-human primates, whilst allowing for T effector cells to be fully activated by available IL-2 (Figure 2). In addition, studies in melanoma mice have shown that for poorly immunogenic tumours, anti-CD25NIB can be administered as a combination therapy with vaccine (Gvax), which drives Treg depletion, effector activation/infiltration and innate cell activation.

Based on these findings, there is an ongoing open label, multi-centre phase I study in collaboration with Roche evaluating this new depleter in the clinic. The selected antibody, termed RG6292, binds to area of CD25 that does not interfere with IL-2 binding to its receptor subunits (IL2Ra, b and y), enabling simultaneous depletion of T regs and activation of T effector cells. Thus far, the trial has shown positive results, with good tolerability seen in patients and the most frequent adverse event being manageable skin toxicity.

Talk 2: On the road to synthetic immunity: novel CAR designs

CAR is a synthetic chimeric antigen receptor that reprogrammes immune cells for therapeutics purposes, with the first FDA approval in 2017 of CD-19 CARs for B cell malignancies. Ongoing studies are currently working to translate this concept to the treatment of solid tumours. CARs bear the characteristics of monoclonal antibodies and a T cell receptor, with distinct canonical domains including antigen recognition, structure, costimulation and T cell activation. Immunotherapies have curative potential in the context of cancer; however they must harness T cell specificity, persistence and potency to achieve sustained activity and thus efficacy. The two CD-19 CARs that are currently approved for cancer treatment make use of either: 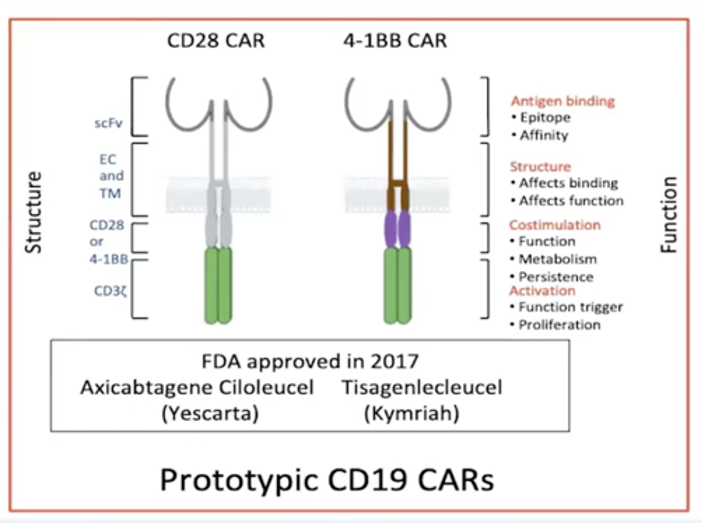 Toxicities and failures of CAR therapy

While the advent of CAR T cell therapy represents a significant step in the field of oncology, a number of resistance mechanisms have arisen over time, including:

Various strategies for overcoming these problems have been devised in an attempt to establish a new, better set of CAR T cell therapeutics. These include the following:

Transcriptional regulation: CRISPR/Cas9-targeted integration into TRAC locus found that enhanced potency of TRAC edited T cell had better maintenance of function by regulating expression of CAR, which could delay onset of T cell exhaustion with reduced toxicity. The concept will be tested in the clinic soon.

Epigenetic enhancement: various strategies are being used to reshape the epigenome of CAR T cells. Disruption of TET2, a dioxygenase well known in oncology for association with myeloid leukaemia, has been found to increase overall efficacy of CARs. Disruption of SUV39H1, a histone methyltransferase, enables memory T cells to retain the ability to differentiate into effector cells in a recall. In particular, these SUV39H1 KO CAR T cells show persistence in a functional state when mice with leukaemia are re-challenged at high dose after initial rejection of a tumour.

Threshold antigen sensitivity: Mechanisms of therapeutic escape can occur even if antigen is present, albeit at a low level. HIT receptors display greater antigen sensitivity than CARs and it is thought that such novel design will enable targeting of antigens at low density, which are beyond the reach of current CAR T cells.